SPECULATIONS OF A LAYMAN ABOUT THE UNIVERSE 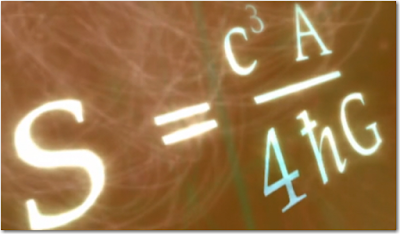 Speculations of a layman about the Universe.

Trying to understand the Universe, Steven Hawking came up with one elegant equation representing all the branches of physics that may affect a Black Hole, showing a deep underlying unity in nature. Would we be able to reconstruct our souls one day? Is all that information destroyed forever? Or is it transformed and saved in Universes without Black Holes?

In an amazing world that we can barely comprehend, are we wasting our time trying to understand the Universe, its nature, its interactions and inner workings? Does cause and effect gets unrelated if information is supposedly destroyed in a Black Hole? This was a debate that lasted for 30 years or more. One of the most controversial theories in science so far: “The information Paradox or the Hawkins Paradox” which is a battle that begins at the birth of the Universe and touch deep inside the atom, into its particles, quanta and strings. Perhaps a unifying theory of everything, the very big and the very small. Steven Hawkins said that understanding in a sense, means that you are in control, or I would argue, it will give you the sense or the illusion of control. Hawkins started part of his fame, from trying to understand the relationship between the infinite small point of infinite gravity and infinite density in the Big Bang, and a Black Hole that begins with a momentum event: the dead of a star when it collapses in itself. Where a star has been, gravity becomes powerful and sucks in even light and radiation. At its center, gravity is so high that transform time and space, physics brake down, all matter collapsing into an infinitely small and dense single point, mimicking the singularity or the beginning of the Big Bang, and taking us closer to its understanding. At a Black Hole, space and time comes to an end and matter is crushed out of existence, taking us back to how time began in the Big Bang. Once matter cross the Event Horizon, it can never return. Hawking imagined and wanted, a complete mathematical description of a Black Hole, using different types of physics, some of which were incompatible and never been used together, picturing interactions between different forces of nature, including gravity and the quantum world of subatomic particles. 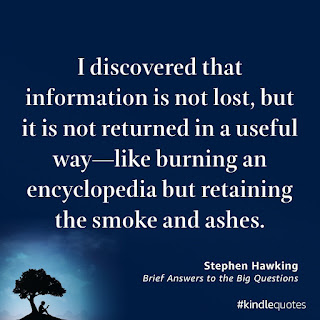 One of the fundamental principles of physics is that everything is made up of particles, and that the information encoded in these particles can never be lost. Are we not made of particles, our bodies, our brains, our minds? No brain, no mind, no consciousness, no “soul” right? No invisible force that appears to animate us”? In the 1960s, Nobel laureate Roger Sperry showed that the mind and our consciousness are divisible, therefore disproving that aspect of Descartes’s theory; but that is another conversation. However, is long been one of the most deeply held believes, that the information encoded in all particles, can never be lost. The consensus is that information never disappears, it can be scrambled, modified etc. It is a very basic principle of physics that information is never destroyed. According the laws of quantum physics, whatever you do to an object, you can always retrieve the information in the particles that make it up. So, if you collect the all the information about an object, you can reconstruct it from scratch. And this was the fundamental principle that Hawking challenged. So, is information and matter in the Universe lost when it enters a Black Hole? If that is so, it also must be happening in all kind of contexts, having the most dramatic effects in the ordinary world. If the Information Paradox is right, then parts of the Universe must be missing. Predictability does not work, and cause and affect are decoupled. Science nor our memories could be trusted, information will disappear, the Universe will be chaotic and nothing preserve over time, no correspondence between past and future. If is not right, are we all still around even after our deaths, dispersed, in other forms?

Since 1972 scientists were able to observe Back Holes. More that 100-thousand-miliions at this point, supermassive and maybe tiny Black Holes all across the Universe, including the ones we don’t see. If the Paradox Information theory were thru, all of these Black Holes were machines eating up information.  Leonard Susskind started talking about a contradiction that occurs at the Event Horizon in Black Holes. About of what would happen to any person, following into a Black Hole at the edge of the Event Horizon; as it falls in, it will be converted into electrons, protons, neutrons, just completely destroyed in its present form. From the perspective of the person falling in, nothing will be happening. This same equation for both perspectives, is saying that someone falling into a Black Hole will feel different experiences. Is also saying that this person could be both dead and alive. Leonard Susskind says that both stories or perspectives are true. So, the information of everything falling in, remained stretched at the edge of the Black Hole, and that means that information is not destroyed and is theoretically, possible to be retrieved. This is how the Information Paradox was supposedly solved and confirmed 10 years later in a paper by Susskind. Cause and effect are still related after all, our memories are safe. Or is all information destroyed in Black Holes and  across nature, and being kept in other Universes without Black Holes as per Hawking affirmed?