SOCIALISM At its BEST 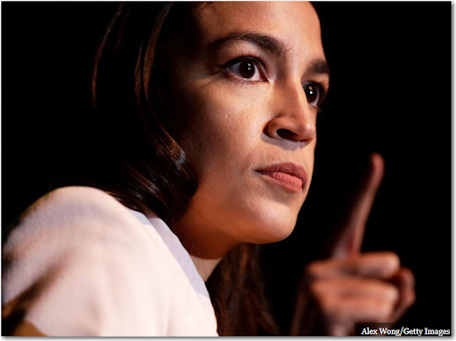 Left-wing Democrats and Never Trump Republicans appealed Friday for assistance in compiling lists of Trump supporters to they could be held “accountable” for supporting President Donald Trump after the election.

“Democratic socialist” Rep. Alexandria Ocasio-Cortez (D-NY) tweeted: “Is anyone archiving these Trump sycophants for when they try to downplay or deny their complicity in the future? I foresee decent probability of many deleted Tweets, writings, photos in the future.”

Michael Simon, who describes himself as a former staff member in Barack Obama’s administration, replied in the affirmative, linking to what he called the “Trump Accountability Project”:

Every Administration staffer, campaign staffer, bundler, lawyer who represented them — everyone. https://t.co/PHx8v8GxOp

The database at the site includes a list of federal judges appointed by the president.

Others also tweeted to announce the project:

We’re launching the Trump Accountability Project to make sure anyone who took a paycheck to help Trump undermine America is held responsible for what they did.

Join us and help spread the word.https://t.co/wtVxGIlYOK

Jennifer Rubin, a Washington Post columnist and Never Trumper, tweeted that anyone challenging the 2020 election results should not only be disqualified from holding public office, but ostracized from society.

“Any R now promoting rejection of an election or calling to not to follow the will of voters or making baseless allegations of fraud should never serve in office, join a corporate board, find a faculty position or be accepted into ‘polite’ society,” she tweeted. “We have a list.”

Prior to the election, some left-wing commentators called for a South Africa-style “Truth and Reconciliation Commission” for Trump supporters.

The original Truth and Reconciliation Commission death with gross abuses of human rights, primarily by the apartheid regime, which imposed racial segregation and tortured and murdered political dissidents in custody.

Update: Others appear to be assisting the effort: 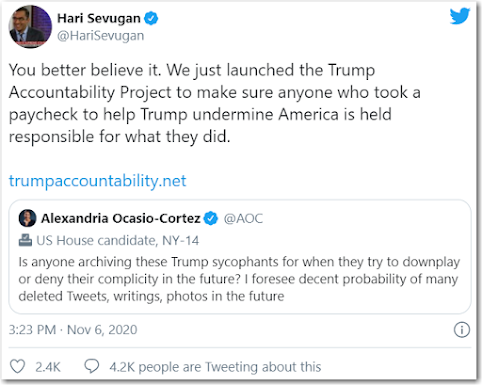 Of the above, Sevugan and Abrams are both former staffers for Pete Buttigieg’s presidential campaign. Buttigieg is a member of Joe Biden’s presidential transition team, in the event Biden is ultimately certified as the winner of Tuesday’s election.

Update II: MSNBC’s Chris Hayes has joined those calling for “thousands” of Republicans to be held accountable. Others continue to promote the “accountability” project: 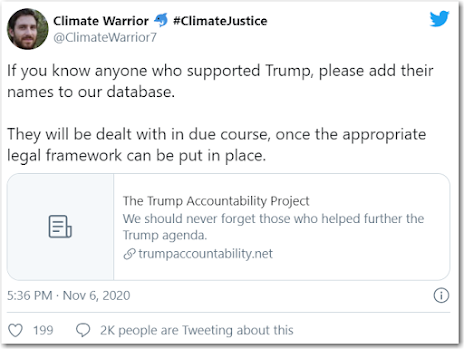 Joel B. Pollak is Senior Editor-at-Large at Breitbart News and the host of Breitbart News Sunday on Sirius XM Patriot on Sunday evenings from 7 p.m. to 10 p.m. ET (4 p.m. to 7 p.m. PT). His newest e-book is The Trumpian Virtues: The Lessons and Legacy of Donald Trump’s Presidency. His recent book, RED NOVEMBER, tells the story of the 2020 Democratic presidential primary from a conservative perspective. He is a winner of the 2018 Robert Novak Journalism Alumni Fellowship. Follow him on Twitter at @joelpollak.