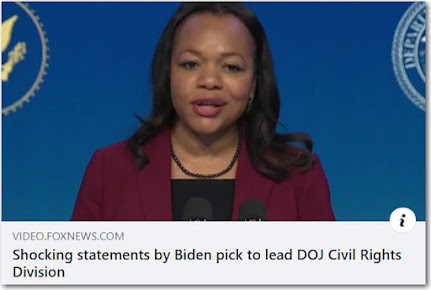 Biden pick to head DOJ Civil Rights Division wrote Blacks had 'superior physical and mental abilities' As per the information provided by the video above, Kristen Clarke wrote a letter to The Harvard Crimson in 1994 as the president of the Black Students stating the below points, is there anything more racist that this?

• "One: Dr Richard King reveals that the core of the human brain is the 'locus coeruleus,' which is a structure that is Black."

• "Two: Black infants sit, crawl and walk sooner than whites"
• Three: Carol Barnes notes that human mental processes are controlled by melanin -- that same chemical which gives Blacks their superior physical and mental abilities."
• "Four: Some scientists have revealed that most whites [sic] are unable to produce melanin because their pineal glands are often calcified or non-functioning."
• "Five: Melanin endows Blacks with greater mental, physical and spiritual abilities -- something which cannot be measured based on Eurocentric standards."