La Habana in ruins, Leonardo Padura is looking for missing Madonnas and the cuban regime is fixing facades and monuments 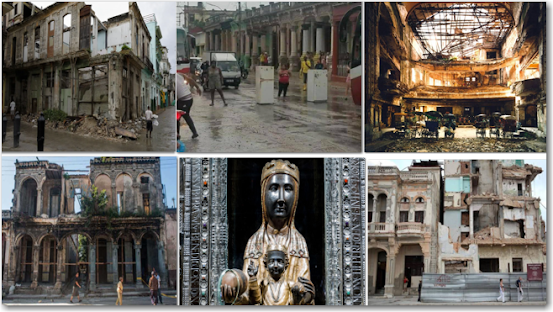 WSJ published a book review of “Transparency of Time” which I would call “Transparency of socialist surrealism “. Any writer should be a reflection of his time, culture, environment and circumstances. Apparently, Mr. Padura must be residing in London, Miami or some other place; but for sure not with Mario Conde in La Habana in ruins. Besieged city where the main concerns are the daily survival and what your family will be able to eat that day, or what wrong sentence or actions might have escaped your self-censorship, as well as your real revolutionary oppressors. The all seeing CDR spies, opportunistic neighbors and other “utopian fake-fact checkers” will be listening. By tattletale, or sold whistleblowers, you may end up in Villa Marista, the infamous political police jail, or become invisible  in a socialistic abracadabra act of disappearance. Any Cuban, that has lived in this time and place of dystopia and total accelerated entropic chaos in Cuba thanks to its socialist rulers, knows that to spend his days chasing a black Madonna in the transparency of time, is absurd and chimeric. For sure, you will die of hunger and necessity first, before finding any missing Madonna. In my time in Habana, there were not book dealers left, there were only black-market dealers for food and daily necessities like toothpaste, soap, shoes, and any other kind of a decent garments like socks, underwear, jeans, T-shirts etc. Transportation in the city, was like the real social magic reality, that was totally absent or unpredictable at best, if you take the chance to grab it by the nails of its horse… Art dealers? Custodians? Cubans are trapped by the present and their daily survival. No time for the 13th century, you are trapped by your survival in the present, or you will go hungry. Ha! Obviously, a different reality. In Cuba all the Art that survived the Castro socialistic involution, was sold by the government to foreign entities to finance the Castro expansionist subversive nightmares in Latin America and Angola. Miami connections? Ah! Again. Maybe traveling, but only for Padura or his Communist Party’s privileged characters, that were the only ones that could afford the permission and finances of free wandering, or the unlawful possession of a Cuban passport. London, Washington DC, international intrigue? Ha! Again, and again… The only trick on time or reflection here, is the Cuban tragedy of destruction, created by the socialist nightmare of a few delinquent bullies, that are responsible for the actual death and assassination of character and idiosyncrasy of the Cuban people, it’s nation, economy and culture. Every Cuban victim of the daily dysfunctional dystopia caused by the Cuban enfolding knows, that the most important item in the Cuban reality is Ideology above anything else. Certainly, the only “hypnotic” quality of this book, is its fictional degree of escape to a reality that they don’t understand. Yes, also victims of the tricks of time, destruction entropy, social isolation and economic regression in an accelerated process in time, caused by the involuted nightmare of a couple of Cuban gangsters. I wonder what is the price that the author pays for being allowed to talk about this idyllic fantastic farce of “Transparency”, without mentioning how fictitious are his “PIs” for sure of the Cuban political police, or profilers of the G2. This book is, not by imagination; but by a false fiction of inexistent newspaper reporters, jailed contra-revolutionary whistle blowers etc. All of it belongs to another time, another place. Where does the manipulated imagination of this author, or his impossibly revolutionary characters including Mario Conde, come from? From where the abstraction of their existence, out of the Cuban Tragedy, they comes from? Where are the jailers, the political prisoners' and its police, the CDR, the Communist party, and the horrors of the daily life in Habana? Is Mario Conde a Cuban exiled living in freedom out of the fantasy of the Cuban paradise? I say… weird similarity and parallel between, the malicious naiveté of the politized globalism and extreme left culture in USA, and their intentions around the world. There a more historical fantasies to read! There are a lot more to learn from history and from the millions of victims of socialism, communism and all revolutions in History.