From a victim of communism/socialism to a country of Freedom


Theodore Roosevelt may have been talking about a different reality and a different time, and may have been a bit strong when saying: “Any man who says he is an American, but something else also, isn't an American at all” Nevertheless, in these words rely the unity of this country. No true immigrant will really renegade of its culture, its language or origins; but will use them to contribute and integrate himself to the assimilation of the American culture and become part of it. However, from the moment you leave, this becomes YOUR country, you belong to it by choice. All this, strongly reminds me of a movie that I sturdily recommend: “I Remember Mama” a 1948 American drama film directed by George Stevens from a screenplay by DeWitt Bodeen, whose work was adapted from John Van Druten's stage play, based on Kathryn Forbes' novel Mama's Bank Account, which was originally published by Harcourt Brace in 1943. The story in all its variant forms recounts the everyday life and economic struggles of a Norwegian immigrant family in San Francisco in the early 20th century. Those are my grounds against the trend of interminable list and multiplicity of labels popular today. 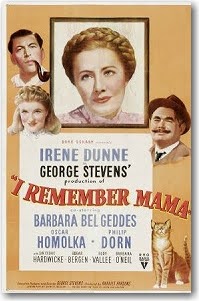 The more time passes, the more AMERICAN I feel, despite what anyone may think. American by choice, American because of the values, the history and the traditions of this country. Despite all those that want the change for the sake of change, even if it is for the worse or for the fiasco of an experiment, of all those that openly hate and want to destroy the greatness of this country. Insisting, regardless of the dysfunctional false idea of the “globalism” for the engrossment of their packets, and in the name of a naive dream or nightmare, that human nature does not know how to effectively implement.

A flag, a language, its borders, its traditions, laws, loyalty, culture, way of life; that is what holds the cohesion and identity of a country, that is what makes it CIVILIZED. That is what it makes possible its humanity, the value of life and liberty. Its articles of Constitution, its Laws, compromise, respect and agreement to respect everyone else’s liberties and happiness, as long as it does not hurt another member of such an agreement. ¿Is a divided, bankrupted “European Union,” with 21 devastating wars between 1455 and 1945, and an overwhelmed identity an example to follow? I don’t think so.

To be an American, is to be united and integrated in its multiculturalist ethos; but united and assimilated to the values that have made possible the greatness of this country. To be conformed to the core values that came with the Pilgrims looking for a new life and freedom, carrying the spirit and traditions of the Carta Magna (1215), The Bill of Rights (1787) and not to pillage and plunder. I am not sure that all today’s immigration waves, have the same spirit. Any other venue or variables, like the ones emerging in today’s progressive ideologic opportunistic, nightmares and experiments, will divide, dismember, destroy and weaken this country’s success. We are not is perfect, and we can evolve without destroying our great achievements, and without the chaotic socialist experiments style of changes, that can be seeing imbedded in the political-congress, and House of Representatives corrupted battle grounds. Also, the panic driven main stream media, and the propaganda of hate and resentment against the success of this country, have devoured the immature mini-brains of naïve young generations, coming out of a polluted and corrupted academia.

No one tells me what I am, I am what I am defined by myself, my behavior and my allegiances. I am not a Cuban-American. I am an AMERICAN by choice, of Cuban origins and birth, despite what anything else or what anyone may think; because of my accent, my features etc. My allegiances are of this country!
Posted by Il Pensatore at 5:05 PM