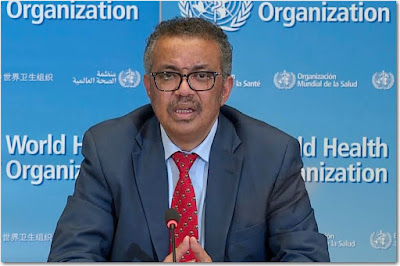 And in the meantime, this Dr. Body bags dares to insensibly accuse and threaten others with “politicizing” the deadly corona virus, which was what he obviously has been irresponsibly doing, with his ineptitude and slowness when reacting to this outbreak. He pretends to accuse others of doing exactly what he is doing, when not placing the responsibility of this outbreak where it should be. Twitter, also let pro-China disinformation linger on its platform amid coronavirus pandemic. The #MaoToo China regime plays with human lives. In fact it is mainly, the China centric WHO the one willing to put politics ahead of Public Health, and the one putting the lives of people at risk in this Pandemic. Not that the reputation of this organization holds very high standards from its dithering reaction to the 2014 Ebola outbreak in West Africa, which claimed more than 11,000 lives. Now its response to the corona virus pandemic is slow, and show political bias in favor of China’s Communist Party. Now justifiably, the W.H.O. is haunted by its tweet on January 24, 2020, where cited Chinese health Officials who claimed that there had been no human transmission of the virus in the country yet, less than two months before it was called a world pandemic. “Preliminary investigations conducted by the Chinese authorities have found no clear evidence of human-to-human transmission of the novel #coronavirus (2019-nCoV) identified in #Wuhan, #China,” the organization had said. The Chinese government, has also been found giving obscure, confusing and contradictory information. The Chinese government reportedly knew the disease was spreading before the tweet was sent, according to the South China Morning Post. China has also expelled “foreign” journalist covering the outbreak, and doctors that initially were trying to warn about this pandemic, have died or mysteriously disappeared. “The world is directly affected by China’s domestic governance,” he added. “The suppression of doctors sounding the alarm, censoring of public health info online and now the expulsion of the journalists who are working to reveal what happened in the crucial early days of this pandemic,” tweeted a NYT journalist.